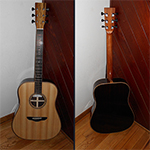 While I have never been a Dread player, there have been many instances of late that required a more traditional and generally BIGGER sound. I have always loved the sound of both Clarence White and Tony Rice. Since they both played the same guitar, a 1935 Martin D-28, I decided this guitar should be a tribute. John McQuarrie was the obvious choice to build a guitar of this caliber...This guitar turned out even better than I could have imagined. The sound is huge with amazing clarity throughout the entire sound spectrum. And, it has plenty of the mid-range Honk that vintage Dreads are known for. Hats off to John McQuarrie at Northwood for another epic guitar! [MORE...]

More about this guitar and more photos here:
http://paramountguitars.net/gtr/NorthwoodDread.htm 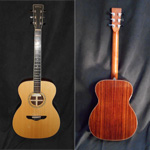 This is the guitar that got me turned on to Northwood back in 2007. This OM is standard depth, and has the wider 1-13/16" nut width. I love the clarity the Adi top adds. This one has been on numerous recordings, and was my main live guitar for many years doing acoustic Blues with Mare Edstrom. This guitar was featured on my Sacred Wood album in 2008 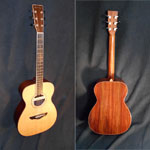 This has been another favorite for my live performances. There are quite a few You Tube videos playing Blues with Mare Edstrom featuring this guitar. The deeper body makes this one particularily loud and like all Northwoods, very versatile. I recorded quite a bit of "Malakai's Rainbow" with this one as well.

VIDEOS with this guitar:

This is one of the woodiest guitars I have ever heard. It almost sounds like a Cello at times. I took several excellent guitars in the studio to record Way Beyond the Blue with Mare Edstrom. I ended up using this one for the entire album. It records beautifully. This one has the older Lakewood dual source pickup system in it. I really like the way it sounds live as well. It has incredible headroom for a Cedar top. 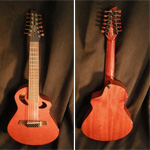 The folks at Veillette approached me about stocking their instruments [at Paramount] and asked if they could send one over for me to look at. I was so blown away by the pure genius of this instrument I immediately sent them a check. It has been an essential part of my arsenal ever since. This guitar is an inspiring composing tool, a unique recording voice, and an exiting performing instrument, both solo, and with the Midwest Guitar Trio. The realm of sonic possibilities it provides seems to be endless. 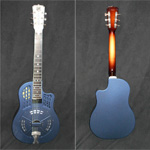 This is a full tilt Blues machine...very loud and crystal clear. I added a Lace Slimline pickup so this one is stage ready. I have used this guitar for much of the slide work on Mare Edstrom's Blues albums. 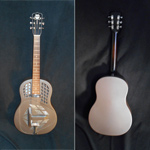 This was one of the first re-issue polychrome triolians made. I have had it for 18 years now. It has been played on many album projects, including all of the slide work on my first album Brave Face. It was also used on most of the Mare Edstrom Blues albums. I salvaged a cool old Rowe pickup from a trashed early 60's Harmony and stuck it on with 2- faced carpet tape a few days after I bought it. An absolute gem! 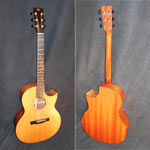 I received this guitar from David in early 2000. This is the first Webber I had ever actually had a chance to lay my hands on. David suggested I take it home for the weekend to give it a good test drive. To this day I have not brought it back. I have recorded extensively with this guitar including much of Road to Tivoli. It has made many appearances on my other solo albums over the years. 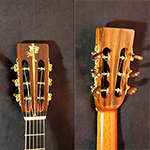 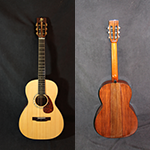 I had been Chasing this guitar since it first entered the country in June 2007 for the Healsburg show in California. I have always been a huge fan of Bill Kelday's guitars and the woods on this particular guitar appealed to me. I am happy to say the sound and playability exceed my expectations. This guitar is pure magic! 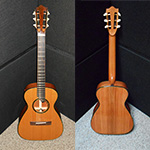 This is a guitar Josh and I have talked about building for quite some time. I wanted a 3/4 size guitar that could be tuned standard or up a third as a Terz. I couldn't be happier with the end result. This guitar is so much fun to play. The voice is unlike any I have ever heard. I have never been a fan of capos, simply because they tend to soak up too much tone. This allows me to have that chimey bell-like tone without sacrificing any sustain. This guitar rings forever and ever and ever! 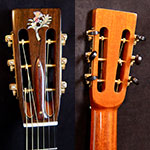 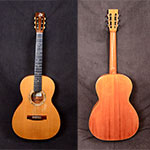